Structure Systems: A Tool Worth Your Time

Taking to the Woods with a SOLIDWORKS-Designed Ultralight Tent

Warning: DO NOT TAKE UNTESTED GEAR INTO THE WOODS.  Especially if said gear would be essential to survival in a worst-case scenario. With that preface, here we go…

Living in Greenville, SC, Pisgah National Forest is an outdoors enthusiast's playground just an hour and a half outside of my door. While my default in these woods is mountain biking, lately I've enjoyed getting into hiking and backpacking. 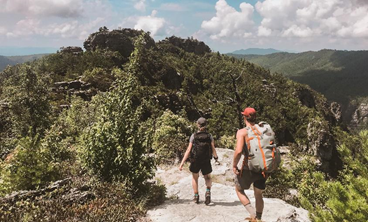 As I have gotten into this new method of exploration, I've also developed an obsession for gear. Due to ultralight gears' big price tags and a drive to create things myself, I have been playing around with some of my own gear ideas. Shelter was my first priority, because it's an essential piece of gear, takes a substantial amount of room in a pack, and light, compact set-ups cost a fortune.

So here is the question:

Can I use SolidWorks to design and build a lightweight, low cost sleeping set-up?

My dabblings into backpacking have led me to spend nights in a variety of, let's call them, sleeping situations Lessons learned:

1-A Hammock without a canopy is a horrible idea.

2-A Hammock with a canopy isn't that much lighter than a tent. And a lot colder.

3-Bivys are basically glorified trash bags. Light, compact, and usually waterproof. But you have to â€˜shimmy' in and can't sit up. I wasn't a huge fan.

The solution between the tension of size and comfort seemed to be a single-wall, one-person tent.

2-Pack down under 35cm in length. Combine backpacking and bikes and you get bikepacking. The handlebars are a great place to mount a tent, but that means the packed tent has to be narrower than your handlebars.

3-Weigh less than 900 grams (2lbs). I have found pack size is more impressive in person and more applicable than weight, but weight is a fun metric

4-Time Crunch-By the time I had this idea on paper, I only had two weeks until a 2-day, 2-night backpacking trip on the Art Loeb, a 48km trail through Pisgah.

I started this project with the same motto I start most: KEEP IT SIMPLE. At least with the actual design. Tents aren't complex; don't make this one so.

To design a tent in SolidWorks, there are two applications that aren't often used: soft goods and bent structural members. Could I use SolidWorks for these applications? I was about to find out.

After playing with some bivys (see 3 and 4 from Preliminary Research), I knew I wanted a single ridge down the middle, which meant a single primary pole. While considered freestanding,' I would rely on stakes to tension out areas instead of using additional pole structure. I also wanted the door to be in the front with secondary poles around said door. 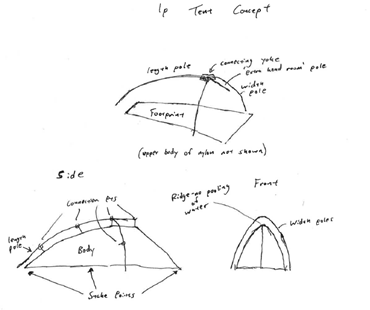 The general shape that I was after.

A tent is obviously more than one part. But all the parts fit smoothly together, at least in a functional tent. Which raised some questions. How do I get all the curves of the poles to match? And the tent body to follow the poles?

Enter top-down assembly modeling. I started everything at the assembly level with some general profiles. 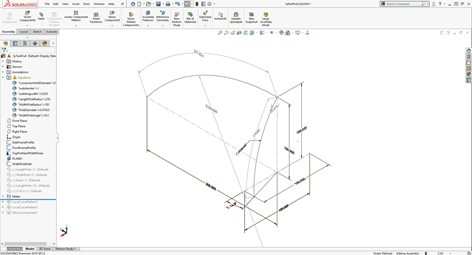 The general profiles with dimensions. What you don't see is all the bending calculations and trigonometry to get the 16.5 degree angle between the length and width poles right while keeping the structure balanced.

In the screenshot, you may notice a list of global variables. Some of these are controlling the layout sketch, others are controlling aspects of the individual parts. Yes, that meant I had started a file referencing web. Welcome to the danger zone.

I opted with a sweep instead of weldments to model the poles in the bent state as it was easier to drive changes with assembly level global variables. 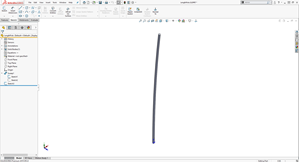 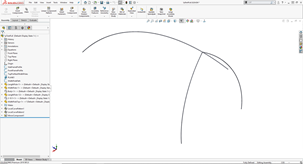 Simple, but critical to the overall design.

Thin material screams surfacing, and boy do I love some surfacing.  Problem was, I had already dove into a top-down approach.

Was the SolidWorks universe about to blow up?

I started out with the floor profile. 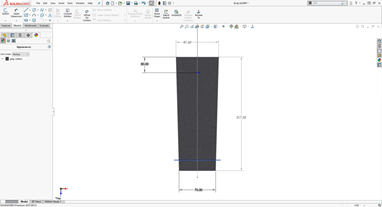 Those light grey reference dimensions are driven by the assembly level sketches.

From there, I went to the tent sides. I wanted to limit seams, so I made each side as one continuous surface consisting of three lofts. 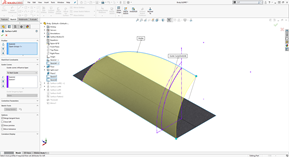 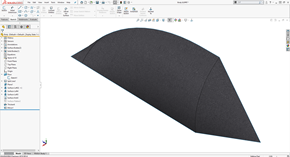 The progression of the lofts. Not the cleanest of the surfaces, but it was simple and ended up being easy to create.

Now that I had the body designed, how the heck was I going to translate that surface to a flat piece of fabric? Enter Surface Flatten. 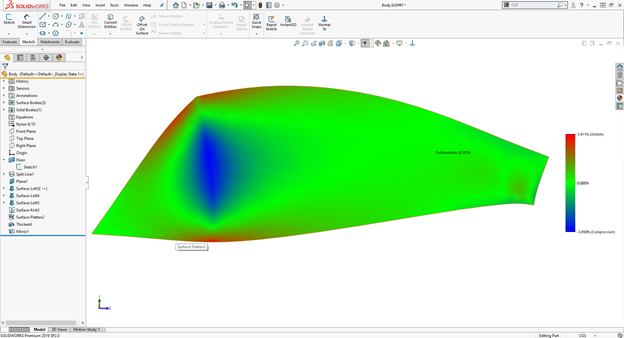 This is what I needed to cut out of the fabric later on. Shown here with the deformation plot.

I didn't know what the deformation plot would correspond to or what the limits of it were. All I knew was that I had my pattern. Now for actually transferring it to the fabricâ€¦

There were three small parts; the yoke at the intersection of the poles, ground connection points, and clips to hold the body to the poles.

A simple yoke to connect all the poles. 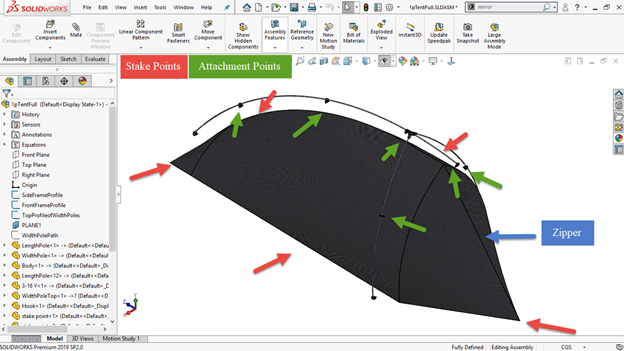 Calculated weight was 577 grams, giving me 323 grams to play with for the finishing touches.

Putting it all together

Now that I had the CAD model, how the heck was I going to put this together in a week and a half before our Art Loeb adventure? Did I mention I'm pretty bad with a sewing machine, and zippers might just be my arch-nemesis?

For the body of the tent, most manufacturers use some variation of nylon fabric. I ran across some 30 Denier (measurement of thread thickness; 30 is on the thin, light side) ripstop nylon with a waterproof coating on eBay. Perfect. The poles were easy to find on McMaster-Carr.

The first and most challenging step in building the tent was how to transfer the flattened surface in SolidWorks to the actual nylon fabric. In a stroke of genius, I fired up the projector and spent a half hour adjusting the zoom just right to get the proper scale. 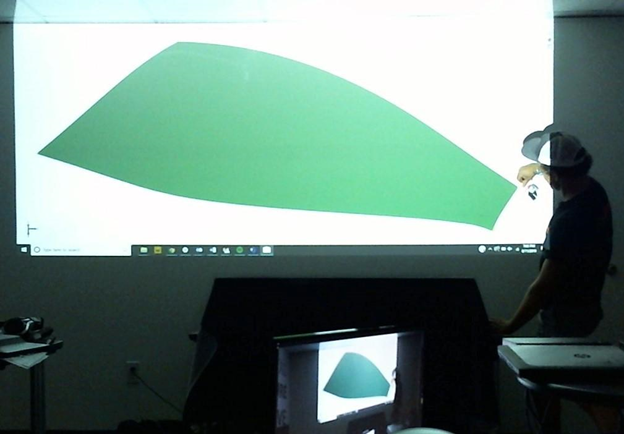 Hey Luke, whatcha doing? Me: Don't worry about it.

Taping the nylon fabric to the wall and tracing was actually pretty easy. The sharpie didn't even bleed through to the wall.

With my sewing machine broken, seams were done with EZ-Steam II, a heat and pressure sensitive double stick tape that activates when running an iron over it. 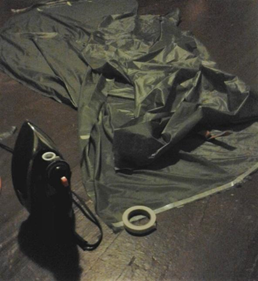 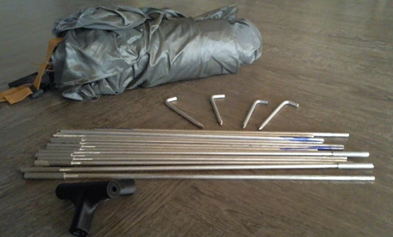 While the trip got shortened from a full weekend of backpacking to an overnighter, it was still a great opportunity to test the tent out. 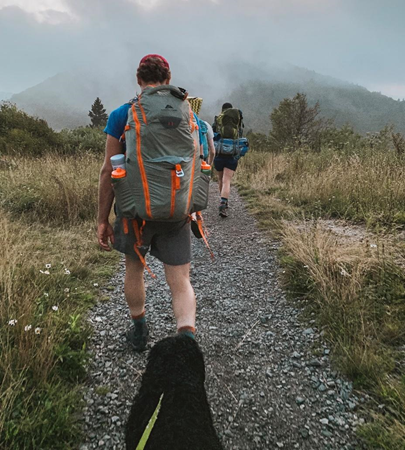 On the trail again. 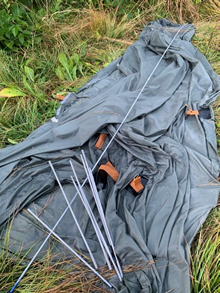 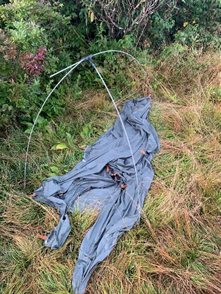 Set-up and tear down wasn't nearly as difficult as I thought without the poles being attached.

Both the tent and I made it through the night. Fortunately, there was no rain, but there was the most dew I have ever seen coating everything in the morning. 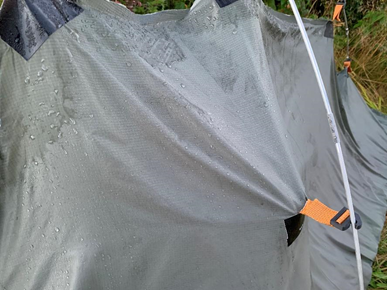 So much dew. Everywhere.

There will be future tests and improved iterations, but all in all, the ultralight tent project worked out. I woke up fortunate to be warm and dry, enjoying coffee and a pastel-painted morning sky. 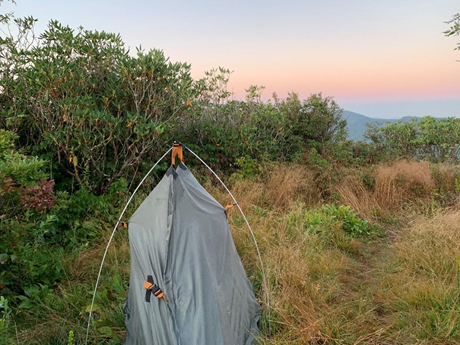 I had three goals in terms of the finished tent:

1-Waterproof. Nope. But playing with seam technique could remedy this in prototype 2.

2-Pack down under 35cm in length. YES! Poles, the limiting factor here, came in under 35 cm. Holding everything in one fist for the first time was really cool. 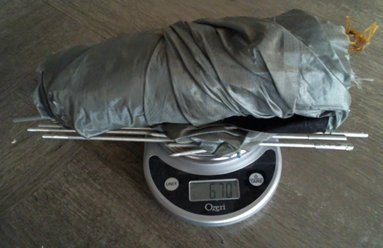 Just tipping the scale with over 200 grams to spare. Maybe I'll use that allowance for waterproofness for prototype 2.

Questions posed in regards to SolidWorks:

1) Can SolidWorks be used for bent structural member design? YES!

2) Can SolidWorks be used for soft good design? YES!

Surface modeling is great for this, and â€˜Surface Flatten' is an incredibly valuable tool to bring the design to life.

I wouldn't recommend it in most applications, but in this case where the surfaces were fairly simple, it worked out great. It allowed me to test different dimensions quickly, and I did not get a single rebuild error.

4) Can SolidWorks be used to design and build a lightweight, low cost sleeping set-up? YES!

670 grams and a final cost of about $80 (not counting unused materials), I'd give this a yes. This may have been stretching what most would call a typical application. But not only can it be done, there were specific tools (Top-down, Surfacing, Surface Flatten) inside SolidWorks that significantly helped the design and build process.

Until the next adventure.

Thanks for joining us for this week’s Three Minute Thursday! Want to learn more? Check out our Training Courses created specifically for SOLIDWORKS users.